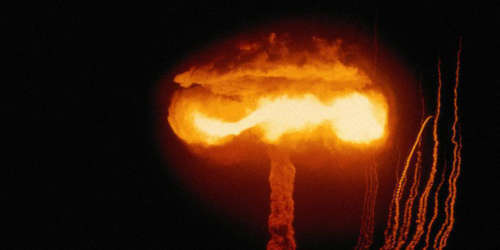 We come now to our second point, that initiation veils a secret and that the revelation of that secret is imminent. Just what this secret is, I may not reveal, but it is concerned with a peculiar type of energy which can be induced at a moment of supreme tension. The only possible hint I can give you in connection with this mysterious matter is that it is closely related to the “Blinding Light” which Saul of Tarsus saw on the road to Damascus and the “blinding light” which accompanied the discharge of energy from the atomic bomb.

Is the etheric web of the planet sufficiently stable and balanced so that it can adequately respond to the new and potent forces which could and will pour through it into objective expression? I would remind you that the release of atomic energy has had a far more potent effect in the etheric web than in the dense physical vehicle of the planet. Three times the atomic bomb was used, and that fact is itself significant.

Discipleship in the New Age, Vol. II , SECTION ONE – TALKS TO DISCIPLES – Part 3

Owing to extra-planetary stimulation, to the immediate planetary crisis and to the present invocative cry of humanity, energy from Shamballa has been permitted to play upon the “centre which is called the race of men” and has produced two potent results: first, the world war was precipitated and, secondly, the fission of the atom, resulting in the atomic bomb, was brought about.

Curiously enough, it is the wise, controlled use of the results of this scientific adventure in connection with the atomic bomb which will eventually bring about a specific revelation of the nature of certain forces in relation to light; this event will transform world thinking and lead to a new type of transmutative process, as far as man is concerned.

For ages, the potency of that which lies behind the fifth initiation—in the planetary sense and not in connection with the individual initiation with its revelation indicating first ray purpose—has held sway on Earth. Knowledge, the revealing of the Mysteries, the attainment of scientific achievement, producing the activity of the fifth plane of mind, has governed human thinking and advancement; God in nature (i.e., the planetary Logos in concrete and material expression) has been revealed, and this has culminated in that tremendous expression of power—the atomic bomb.

Rays and The Initiations , SECTION TWO – THE ASPIRANT AND THE MAJOR INITIATIONS – Part 5

This destruction … and the consequent release of their imprisoned souls, is a necessary happening; it is the justification of the use of the atomic bomb upon the Japanese population. The first use of this released energy has been destructive, but I would remind you that it has been the destruction of forms and not the destruction of spiritual values and the death of the human spirit—as was the goal of the Axis effort.

The Externalisation Of The Hierarchy , SECTION THREE – FORCES BEHIND THE EVOLUTIONARY PROGRESS OF THE RACE – Part 9

The United States would also gladly undertake to force the American brand of democracy upon the world, using her vast capital and resources in so doing, and gathering into her banks the financial results of her wide-spread financial dealings, preserving them safely by the threat of the atomic bomb and the shaking of the mailed fist over the rest of the world.

The Externalisation Of The Hierarchy , THE RETURN OF THE CHRIST – Part 2

3. The world war then reached a final stage; the first stage was from 1914-1918; it then proceeded in a subterranean [548] fashion, only to erupt once more in 1939, continuing with extreme fierceness and cruelty till 1945, when the power to continue the fight ended and the atomic bomb wrote finis to the world chapter of disaster. That atomic bomb (though used only twice destructively) ended the resistance of the powers of evil because its potency is predominantly etheric. Its uses are twofold at this time:

a. As the forerunner of that release of energy which will change the mode of human living and inaugurate the new age wherein we shall not have civilisations and their emerging cultures but a world culture and an emerging civilisation, thus demonstrating the true synthesis which underlies humanity. The atomic bomb emerged from a first ray Ashram, working in conjunction with a fifth ray group; from the long range point of view, its intent was and is purely beneficent.

b. As a means in the hands of the United Nations to enforce the outer forms of peace, and thus give time for teaching on peace and on the growth of goodwill to take effect. The atomic bomb does not belong to the three nations who perfected it and who own the secrets at present—the United States of America, Great Britain and Canada. It belongs to the United Nations for use (or let us rather hope, simply for threatened use) when aggressive action on the part of any nation rears its ugly head.

The United States would also gladly undertake to force the American brand of democracy upon the world, using her vast capital and resources in so doing, and gathering into her banks the financial results of her widespread financial [176] dealings, preserving them safely by the threat of the atomic bomb and the shaking of the mailed fist over the rest of the world.