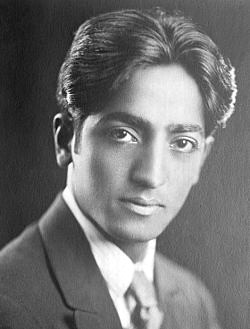 As I have earlier pointed out, the return of Christ will be expressed, in the first place, by an upsurging of the Christ consciousness in the hearts of men everywhere; its first expression will be goodwill.

In the second place, disciples everywhere will find themselves increasingly sensitive to His quality, His voice and His teaching; they will be “overshadowed” by Him in many cases, just as before, He overshadowed His disciple Jesus; through this overshadowing of disciples in all lands, He will duplicate Himself repeatedly. The effectiveness and the potency of the overshadowed disciple will be amazing.

One of the first experiments He made as He prepared for this form of activity was in connection with Krishnamurti. It was only partially successful. The power used by Him was distorted and misapplied by the devotee type of which the Theosophical Society is largely composed, and the experiment was brought to an end: it served, however, a most useful purpose. As a result of the war, mankind has been disillusioned; devotion is no longer regarded as adequate or necessary to the spiritual life or its effectiveness. The war was won, not through devotion or the attachment of millions of men to some prized ideal; it was won by the simple performance of duty, and the desire to safeguard human rights. Few men were heroes, as the newspapers stupidly proclaim. They were drafted and taught to fight and had to fight. It was a group recognition of duty. When Christ again seeks to overshadow His disciples, a different reaction will be looked for. It is because of this that A.A.B. has so consistently belittled devotion and advocated spiritual independence. No devotee is independent; he is a prisoner of an idea or a person.

What is the immediate revelation which the initiates and the disciples of the world are seeking to bring to humanity? What aspect of this essential unity are they endeavouring to make simple and apparent? One of the easiest things in the world to say (as has, for instance, Krishnamurti) is that life is one; that there is nothing but unity. That is a trite formulation of a very ancient truth, and one which is today an occult platitude. But life is not yet one in consciousness, however true it may be in fact. The reason for this is that life is loving synthesis in action, and of that there is little today in demonstration. We have life in activity but love, based on realised unity and leading to expressed synthesis, is still absent. The vision of it is, however, upon the horizon of many, for in these days many are attaining sight and light is pouring in. Revelation will come when the world disciples and initiates have perfected the art of revelation.

The original platform of the T.S. had been founded on the autonomy of the lodges within the various national sections but, at the time that Foster Bailey and I came into the work, this whole situation had been fundamentally changed. Those people were put into office in any lodge who were E.S. members and through them Mrs. Besant and the leaders in Adyar controlled every section and every lodge. Unless one accepted the dictum of the E.S. members in every lodge, one was in disgrace and it was almost impossible for the individual, therefore, to work in the Lodge. The sectional magazines and the international magazine, called “The Theosophist,” were pre-occupied with personality quarrels. Articles were given up to the attack or the defense of some individual. A strong phase of psychism was sweeping through the society due to the psychic pronouncements of Mr. Leadbeater and his extraordinary control over Mrs. Besant. The aftermath of the Leadbeater scandal was still causing much talk. Mrs. Besant’s pronouncements about Krishnamurti were splitting the society wide open. Orders were going out from Adyar, based upon what were claimed to be orders to the Outer Head by one of the Masters, that every member of the Theosophical Society had to throw his interests into one or all of the three modes of work—the Co-Masonic Order, the Order of Service and an educational movement. If you did not do so you were regarded as being disloyal, inattentive to the requests of the Masters and a bad Theosophist.

One thought on “Alice A. Bailey on Krishnamurti”