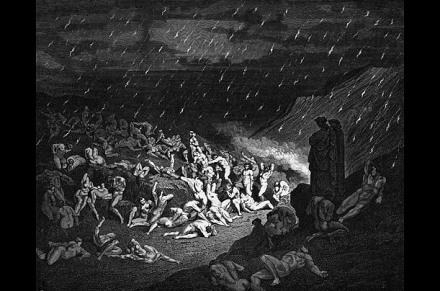 Heaven and hell, are they real? Can a modern person pursuing a spiritual path believe in some concept of hell?

In the KJV translation of the New Testament I see 9 references to “hell” in Matthew, 3 in Mark, 3 in Luke, and none in John. In Acts it shows up twice. In James once. In 2 Peter once. Finally 4 times in Revelation. If I counted correctly that is 23 times.

When I was a child in a fairly fundamentalist church there was no problem with believing in hell. However I can hardly remember hearing the word “hell” in Unity, except perhaps once in a blue moon in reference to delusional beliefs.

These two polar opposites both claim to believe in Jesus. The fundamentalists are very literal in trying to understand those words and in Unity we find Jesus becoming a “wayshower” and he is quoted often, his name is invoked often, but I don’t think any of those words supposedly uttered by Jesus mentioning “hell” are given any credence in Unity, or similar spiritual movements.

Again if I am counting correctly the count goes down to 14 in the NIV translation. Looks like most in Matthew are preserved. But the situation is a little more complicated when you look at the various Greek words the writers of the New Testament used that were translated as “hell.” I believe there are just three (transliterated from Greek):

Now fundamentalists generally emphasize the idea that such punishment was intended to be eternal punishment, a punishment that would last I guess for the rest of time. Looking at the Greek word from which “eternal” usually comes in translation that doesn’t seem entirely justified.

There are two Greek words that are most often translated in phrases like “end of the world,” and “eternal.” They are:

AIONIOS (eternal)
AION (“world” as in “end of the world)

Clearly they are related. The modern word “eon” comes from AION. In fact these are generally gross mistranslations. What is really meant is an “age.” For example from the Gospels:

And as he sat upon the mount of Olives, the disciples came unto him privately, saying, Tell us, when shall these things be? and what shall be the sign of thy coming, and of the end of the world? -Matthew 24:3 (KJV)

A more correct translation would probably be “…and of the end of the age.” The Concordant Literal New Testament translates the above as “…the conclusion of the eon?”

What do I take from this? Very simply I don’t see the New Testament ever talking about time-lasting eternal punishment. Nor does it explicitly talk of an “end of the world” as is believed in most of Christianity. The disciples are asking Jesus how to recognize when he will return at the end of the age, presumably some long period of time  in human reckoning.

In Acts we are told that Christ will come again much in the same manner as he left then:

And while they looked stedfastly toward heaven as he went up, behold, two men stood by them in white apparel; Which also said, Ye men of Galilee, why stand ye gazing up into heaven? this same Jesus, which is taken up from you into heaven, shall so come in like manner as ye have seen him go into heaven.
Acts 1:10-11 (KJV)

The event described above was visible to the followers of Jesus, but they were not very many at that time. Perhaps a couple hundred or so. For most of the world at the time this event was unseen. So if the above prediction is correct when the Christ returns it won’t be the massive event predicted in the “Left Behind” series. Instead the Christ may return again in human guise and only be recognized by a relative few.

Getting back to the subject of “hell,” I am in my sixth decade now. If you are much younger you may not be familiar with “The Twilight Zone” television show back in the late 1950s and 1960s. It was a show including a fair amount of science fiction that tried to come up with stories with a surprise twist at the end.

I remember one episode where it starts out with a gangster getting killed in a gunfight. He wakes up and is greeted by a man who is his guide to the world he finds himself in after death. It seems unbelievably pleasant. He can pretty much have anything he wants. He particularly likes to gamble so he goes to a beautiful casino and he can’t lose. Not even once. There are beautiful women everywhere and absolutely every one of them will go to bed with him at the slightest suggestion. He never gets turned down. The finest food and booze are at his disposal just for the asking.

No matter what he does he can’t lose. But it starts getting a little boring. Part of the “spice of life” was the potential to lose. But not here. Eventually he is talking with his guide and he asks him a question that has been bothering him ever since he got here. He says, “So I wasn’t such a nice guy in life, so how did a guy like me end up in heaven?” The guide replies, “Who told you this was heaven?”

Now the idea is clear. Boredom can be hell too. But that is not the point I am trying to make. We all assume we are living on “Earth” and we only go to hell after we die? My question to you is this: “Who told you that this isn’t hell?,” the place where people go for punishment (and more importantly correction)?

A “hell” that only serves for punishment is really a kind of a waste, isn’t it? In real life we don’t (or shouldn’t) punish our children because we enjoy doing it. We punish them (at least good parents do) in order to hopefully change their behavior. Right? In the original Greek to “sin” really means “to miss the mark.” A loving parent punishes with the aim of improving a child’s aim.

Perhaps if we understand that hell is real, but not an eternal punishment, but rather as a road to correction and redemption then we can see the message of Jesus with a better balance. Maybe people on the path of enlightened spiritual progression can come to understand that all the words of Jesus have potential meaning, not just the ones that speak of love, the words that we see as being “warm and fuzzy,” so to speak.

Except a man be born again, he cannot see the kingdom of God. -Matthew 3:3 (KJV)

Maybe we have to be born again, and again until we learn how to turn hell into heaven? Someone once said that God has no hands on earth but our own. Don’t wait for God to magically do the job. Realize you have to get your own hands dirty and do some of the work yourself. That is, unless you really like coming back to hell again and again.

Heaven is within our reach. But we have to build it with our own hands. Maybe that is the real meaning of hell, and the promise of heaven.