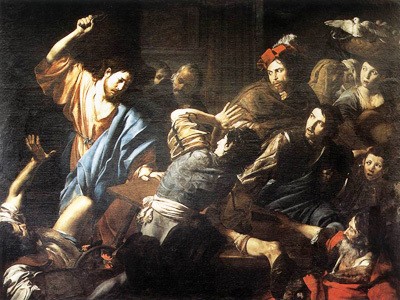 Was Jesus a pacifist as some claim?

A person who is opposed to war or violence of any kind.

“You have heard that it was said, ‘Eye for eye, and tooth for tooth.’ But I tell you, do not resist an evil person. If anyone slaps you on the right cheek, turn to them the other cheek also. And if anyone wants to sue you and take your shirt, hand over your coat as well. If anyone forces you to go one mile, go with them two miles. Give to the one who asks you, and do not turn away from the one who wants to borrow from you. Matthew 5:38-42

Since I am not a traditional or fundamentalist Christian I do not feel constrained to believe that the Bible is the literal, and inerrant word of God. Just thought I would get that out of the way so no one is confused about where I might be coming from.

If we take the quote above from Matthew literally, “do not resist an evil person,” then the case seems to pretty solid that Jesus was a pacifist who opposed the use of violence in any shape or form. If he did mean that, and if he can be shown to have used physical violence, then the case could also be made that Jesus was a hypocrite. You may remember that Jesus criticized the Pharisees for being hypocrites.

In fact in one his more famous actions Jesus attacked the money changers in the Temple with a corded whip and overturned their tables as depicted in John 2:13-15:

When it was almost time for the Jewish Passover, Jesus went up to Jerusalem. In the temple courts he found people selling cattle, sheep and doves, and others sitting at tables exchanging money. So he made a whip out of cords, and drove all from the temple courts, both sheep and cattle; he scattered the coins of the money changers and overturned their tables. John 2:13-15

Jesus goes into the Temple and is greatly angered by what he sees going on. But he does not attack them immediately. He goes out somewhere and gets some cords and makes a whip. That probably took him a little while to do. Then he goes back and creates this famous scene. That shows that although he experienced anger he kept it under control. He didn’t attack them without coming up with a plan and then applying carefully calculated violence to dramatize his outrage at them for polluting a holy place.

Just as surely as the quote from Matthew 5:38 seems to establish Jesus as a pacifist, the quote from John 2 shows he was quite willing to use calculated and controlled violence if necessary. So was Jesus a hypocrite then, saying one thing and doing another? I don’t think so.

I don’t think so for several reasons. I think more than likely Jesus walked a “middle way” that didn’t claim either extreme as an absolute. I think he would agree with the author of Ecclesiastes 3:1-8 in the Old Testament who wrote:

I said earlier that I don’t believe the Bible was inerrant. I am pretty sure that people added to it, and modified some things to suit their understanding.

You have heard that it was said, ‘Eye for eye, and tooth for tooth.’ 39 But I tell you, do not resist an evil person. If anyone slaps you on the right cheek, turn to them the other cheek also.

See the “do not resist an evil person” in a gray color above? Do you suppose that was commentary added by a later copyist? I can’t prove that to you but the context invites that conclusion. Why?

The following sentence really doesn’t need it: “ If anyone slaps you on the right cheek, turn to them the other cheek also.”  It doesn’t need it because it is not a simple command to be non-violent. A lot more is going on here. In that day and age a master who was right handed might strike a slave with a back handed slap to the right cheek. He would not do the same to a person of his own rank. He would strike him on the left cheek with an open hand (if not a fist).

What Jesus appears to be saying here is, “If someone slaps you like you are worthless or a slave, then turn the other cheek and invite then to slap you as an equal.” Jesus is instructing the person to appeal to the empathy and humanity of the person who strikes you, not giving an absolute black and white command to be non-violent.

Indeed this seems to be the context for the rest of the quote. If a person sues you then give them even more than they ask. If a Roman soldier forces you to carry his pack (a Roman law that Jesus is referring to here) a mile take it another mile. Maybe this will appeal to the soldier as seeing you as another human being, not just a beast of burden.

There is a little more evidence in the Gospel of John where Jesus is questioned by the High Priest:

Meanwhile, the high priest questioned Jesus about his disciples and his teaching.
“I have spoken openly to the world,” Jesus replied. “I always taught in synagogues or at the temple, where all the Jews come together. I said nothing in secret.  Why question me? Ask those who heard me. Surely they know what I said.”
When Jesus said this, one of the officials nearby slapped him in the face. “Is this the way you answer the high priest?” he demanded.
“If I said something wrong,” Jesus replied, “testify as to what is wrong. But if I spoke the truth, why did you strike me?” John 18:19-23

In the above case Jesus does not seem to be following his own advice of turning the other cheek, but instead questions why he is being hit. That seems a lot more rational approach than following an uncompromising commandment without understanding as many pacifists appear to advocate.

Skipping to modern times we have a law in Texas that concerns something called “fighting words.” If, for example, you are in a bar and say some really rude things to someone, and he strikes you, then you cannot legitimately claim simple and innocent self defense. You were a party to the fight by the very words you used. Your words incited violence. If in self defense you do serious bodily injury to that person a claim to self defense will not save you.

So did Jesus ever use “fighting words” with the Pharisees, a form of verbal violence? I think he did. Consider this quote from John 8:42-44:

Jesus said to them, “If God were your Father, you would love me, for I have come here from God. I have not come on my own; God sent me. 43 Why is my language not clear to you? Because you are unable to hear what I say. 44 You belong to your father, the devil, and you want to carry out your father’s desires. He was a murderer from the beginning, not holding to the truth, for there is no truth in him. When he lies, he speaks his native language, for he is a liar and the father of lies. John 8:42-44

I think telling these Pharisees that the devil was their father was pretty much fighting words, just as if in modern parlance I would make rude references to someone’s mother. No doubt about it, he intended to drive them mad! He used verbal violence to accomplish that.

So no, I don’t think Jesus was a pacifist at all. I think he saw the great value of pacifism and appealing to the humanity of others in appropriate circumstances, but I don’t think he laid pacifism out as an unwavering rule of good human conduct. His own life as recorded in the scriptures does not bear out that he was a pacifist.