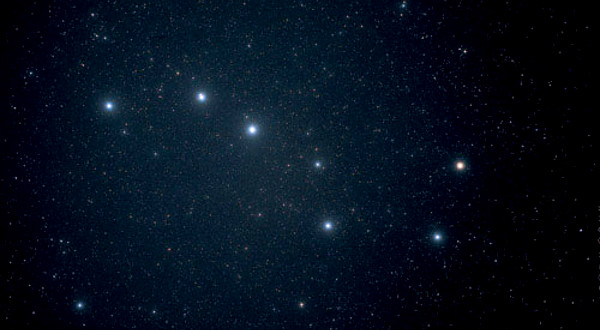 The lesser seven, the greater seven and the planetary seven form one great whole, and these the group must know. When this is realised and the Law of the Supplementary Seven is understood, let the group understand the Three and then the ONE. This they can do with the united breath and the united rhythm.

Each of the seven centres is responsive to one or other of the seven rays and their qualities under the conditioning energy of the soul ray and the forces, emanating from the environment. These centres develop progressively and under the impact of circumstances and the Law of the Supplementary Seven, but all will eventually express in some measure the seven types of ray energy. The Law of the Supplementary Seven can be worded as follows: “The Law demands the entrance of that which can effect a change. The Law demands that right direction should then guide the entering forces.

He now knows himself to be a minute part of that great interlocking Whole, a responsible conscious atom within its periphery. Then as he goes on and learns to submit to the Law of the Supplementary Seven, he finds that from the life angle and through his own conscious direction, gradually developed, all the potencies of divinity are his to use, once he can be trusted, as the advanced initiate can ever be trusted. He is then set free for complete cooperation with the purpose lying behind the Plan.

Some of it you know already but it is the synthetic presentation which I would have you appreciate and appropriate. We can then take up the work to be done within the individual framework by the initiate; I will endeavour to help you to understand somewhat more clearly what the initiate-consciousness would read into the Law of the Supplementary Seven. Beginning with this eighth rule which we are now studying, we enter upon the consideration of certain major unfoldments, major spiritual happenings and a series of major awakenings in consciousness which are in the nature of events.

These are the factors which condition the date of his achievement and not the character undertakings and the soul contacts which are so necessary upon the Path of Probation and upon the Path of Discipleship. We are principally concerned at this point with the interpretation of the Law of the Supplementary Seven. It must be remembered that the Laws of Nature are imposed upon the mass of men, and cannot be avoided.

They tend to bring about increasing relation between the Hierarchy of Souls and Humanity as a whole, between the great planetary centre which is the custodian of the principle of love and the planetary centre, humanity, which nurtures and distributes the energy of mind. The Law of the Supplementary Seven is the great synthetic Law of Life or of Spirit and is the law with which the initiate works; it is this law he wields. From acceptance of the laws of nature and obedience to the laws of the soul, he passes into the positive phase of understanding and wielding the Law of Life.

Clearer than this I cannot be. This Law of the Supplementary Seven is concerned with the inflow of energy from the seven planetary centres to the seven groups or types of men, via the seven groups within the Hierarchy. In this work of transmission the seven centres of the initiate are used as agencies; their work, therefore, is not the interrelated work of right transmission of energy within the septenary constitution of the etheric body of the individual initiate, implementing his life expression, but is the task of being responsive to the seven types of planetary energy which are received in a pure state.

) The high Initiates (Those above the rank of Master) work with the energies coming from the seven planets of the solar system at this time active; these feed or implement the seven planetary centres. But the Law of the Supplementary Seven is applied by initiates below the rank of Master, and they are therefore working solely with the seven centres within the Form of the One in Whom we live and move and have our being. One of their first tasks is to bring about a free flow and right energy relations between the three major centres in our planet which correspond to the head, heart and throat centres in man.

A study of these ideas may carry illumination, but I would again remind you that I write for initiates, living at a later period in this century and in the next. In considering this Law of the Supplementary Seven, I would like to point out that the word “supplementary” is of real significance. It brings in a factor of great interest, from the angle of initiation.

Others pass on into the great Council Chamber of the Lord of the World, and still others pass out of our planetary ring-pass-not altogether. Thus the Law of the Supplementary Seven is ever in force. It functions in the processes going on in the seven centres of the individual man, gathering energy from one centre into another until all are centred, controlled and directed in the head.

Abstraction is indicative of process, progress and development. It is this aspect of the Law of Life (or the Law of Synthesis as it is called in certain larger connotations) with which the initiate specifically deals when wielding the Law of the Supplementary Seven. The group angle of the matter can be seen if you remember that the individual initiate, when wielding this law, draws upon the united energy of the Will as the group is expressing it in “unified rhythm.

In the work of the initiate who is consciously wielding this law, the principle of abstraction (when entering the body) is held focussed in the head and is of such a magnetic potency that the energy of the remaining centres is rapidly gathered up and withdrawn. What is true of the individual process of abstracting the life principle, under the Law of the Supplementary Seven, is equally true of the process in all forms and in all groups of forms. Christ referred to this work of abstraction, as regards the third great planetary centre, Humanity, when He said (and He was speaking as the Representative of the Hierarchy, the second planetary centre into which all human beings achieving initiation are “withdrawn” esoterically), “I, if I be lifted up will draw all men unto me.

Rays and The Initiations , RULE EIGHT

The stage of responding to the higher aspects of the seven Ray Lives and establishing contact with the Three and the One. This is done under the Law of the Supplementary Seven.

Rays and The Initiations , RULE TWELVE

The lesser seven, the greater seven and the planetary seven form one great whole, and these the group must know. When this is realised and the Law of the Supplementary Sevenis understood let the group understand the Three and then the ONE. This they can do with the united breath and the unified rhythm.

Rays and The Initiations , INTRODUCTORY STATEMENT